The Challenges of Being Overweight Traveler

The Challenges of Being Overweight Traveler

Below you will find some travelers that that ran into some issues while flying, just because they are overweight. When traveling, be prepared to overcome some hardships.

James Thomas from NYC had booked a flight from his hometown to Spain to meet his new-found love. He was armed with the knowledge of places around the country he never visited and the best restaurant that would serve his favorite crispy calamari steak. But he ran into a significant problem on the way: seating. The airline denied him the aisle seat, or any other seat because he was morbidly obese. He knew he was never going to be on time to where he needed to go.

It is not uncommon for airlines to cancel seats when they realize that the passenger is overweight. Heavy people are sometimes prohibited from booking a single seat and instead charged for doubles. “They usually cite other reasons like over capacity or not enough room. Which certainly makes sense initially, but then suggest that we book with another airline”, says Christopher who was recently about to fly from Houston to London on an undisclosed airline.

We Are What We Eat

Heavy people are denied extra food on the plane. There is only a limited supply of food for everyone, and that includes whether or not you are obese, according to one flight attendant. It comes down to the head-scratching question: What would you do when you are overweight, and a tiny loaf of bread isn’t enough to sustain through terminals? And how did they feel? “Hungry all the time,” says Chris who had to survive with a small packet of peanuts and a glass of tomato juice on his five-hour journey recently. Chris weighs 410 pounds and needs to eat every two hours for his health condition.

A Little Walk Around

Mike had a horrible time this past month after boarding a plane and occupying an economy seat in the second to last row. He felt stuck. The pain he was feeling was his legs screaming to take 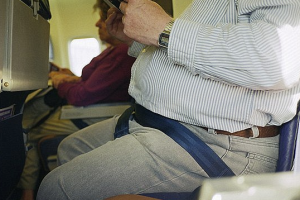 him for a walk. Mike has varicose veins which make his legs look bulgy, dark, and sometimes purple. Heavy people like him have a hard time finding space on the plane to move around, especially when they cannot afford to fly business or first class. Luckily for Mike, whose boss was on the same flight in the first-class section, allowed him to occupy his extra-wide seat located in the comfortable cabin of first class.

During a recent visit to his family, Mario was bullied on the plane by a passenger sitting next to him. Most people don’t realize how passengers who are overweight feel because they are so used to feeling that way. Nor is it reasonable to let the bullies control others, so Mario finally filed a complaint with the airlines and had the local authority investigate the incident. For the most part, bullying is a lot more expected by overweight people than you think. But to experience it on a plane where space is limited, and other constraints are overwhelming, takes the severity to a whole new level.

While it seems like most airlines have not received professional training handling passengers who are overweight, some are prepared and do manage it well. And that’s the purpose of this information – to bring awareness and pinpoint the source of trouble.

By Serenity Watson|October 8th, 2019|Information|Comments Off on The Challenges of Being Overweight Traveler