Is it me, or do women seem to have larger calves than men? Research shows that calf sizes in men and women are determined by body mass index, height, physical fitness, and genetics. However, doubling down on leg days can earn anyone bigger calves. But even then, gender-related differences manifest at a cellular level and are responsible for the significant differences in men’s and women’s calves.

To shed light on these differences and determine if, indeed, females have bigger calves than males, here’s an in-depth comparison on the gender differences in calf muscles.

What Is The Calf Muscle?

The calf muscle is found at the back of the lower leg and behind the shin bone. It’s made up of three skeletal muscles that together help you stand, jump, run and walk. This human skeletal muscle function is to flex your foot, rotate the ankle joints, and lock the knee.

The muscle morphology forming the calf include the soleus and gastrocnemius. These two meet above the heel and affix to the Achilles tendon. Because of this, some experts refer to the muscles as a single large muscle with two parts.

The calf is also made up of the plantaris, found between the soleus and gastrocnemius. Together, the muscles are called triceps surae. However, not everyone has the plantaris muscle.

Differences Between Women’s and Men’s Calves 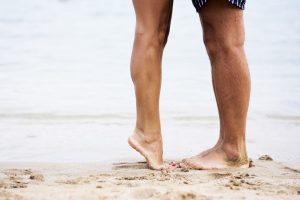 At the same time, studies show the average calf size for a female lies in the range of 13.25” – 16.25”. Height, body weight, exercise, and gender differences play a role in actual calf size in females too.

There’s also a significant difference in fat deposits between the male and female body. Studies show mean fat percentages in men and women are 12%-15% and 18% – 22%, respectively. This is one of the reasons females have larger calves despite being shorter and lighter than males.

Studies show a relationship between calf length and height in people. Generally, the taller one is, the longer their calves are.

A study involving Caucasian’s reveal that females’ calves are 60% as strong as men’s. Also, as the human body ages, we go through body weight loss, commonly known as sarcopenia.

For males over 30, lean body mass is reduced by between 3 to 8% every ten years. The rate is higher for males over 60 years due to the increased risk of falls and injuries.

For females over 30, calf sizes reduce even faster because of muscle weight deterioration and reduced-fat percentage. Generally, older males have larger calves than females their age.

Studies reveal that the female calves have more endurance than male. The sex differences study included eight men and nine female who were requested to flex their feet against several sensors as fast as possible 200 times that measure the torque, power, and speed of their movements.

The results proved that men’s movements were powerful and faster initially but got exhausted faster than women’s. This means that while a male can complete running or walking exercises faster, female muscles perform better.

As a result, if males and females were to participate in a super long marathon, there are higher chances females would dominate the race courtesy of their superior muscle performance and endurance.

But why is this? Well, females and males both use the Type 1 fibers and later shift to Type 2 as the muscles start getting fatigued during physical performance.

However, females switch between these muscle types throughout the exercise. So the endurance isn’t from the slow-twitch fibers but neuromuscular activities inside them.

Do Women Have Larger Calves Than Men?

On average, females have larger calves, mainly because of the higher fat percentage in their legs. But as they age, they lose more muscle mass coupled with fat percentage loss contributing to smaller calves than men. Overall, calf sizes vary depending on height, body weight, and genetics.

This is why so many women look for wide calf rain boots or hunt for hours to find the perfect plus-size thigh-high boots. It can be difficult to find clothing that works when your genetics are fighting against you. For more information be sure to check out Extra Large Living.

By Serenity Watson|December 16th, 2021|Information|Comments Off on Women’s Calves vs Men’s Calves